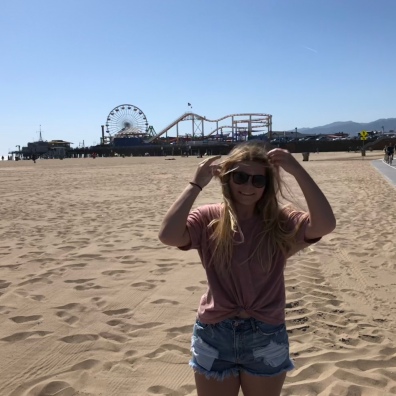 My trip to California was a perfect mix of spontaneity and fate. It went like this:

One morning I woke up to an email from Frontier airlines stating that they had $15 flights to certain destinations. I’ve always been a big fan of traveling and I wish I could do more of it but it’s so expensive most of the time, which is why I thought that this could be the perfect opportunity.

The first person I immediately thought of was my older brother, Kevin. He’s basically a professional traveller; making his way to the Virgin Islands, Colorado, British Columbia, Seattle, Punta Cana, Guatemala in the past couple of years (and these aren’t even all!) He’s been to most of the places that were only $15 so I figured San Jose, California was my best bet since he hasn’t been to Cali yet.

I called him, we found dates where each way was only $15, and booked it within 20 minutes basically. Neither of us had any idea what exactly was in San Jose or what we were going to do. But hey, it’s a flight to Cali for $30 round trip. How could anyone pass that up?

The more we looked into San Jose, the more we found that there isn’t actually that much to see or do there. We started making our own separate lists of things in California that we’d like to see, no matter where they were located. This pushed us to the decision of traveling throughout California to different destinations each day. I wanted to map through exactly where we went and what we did to show you that it was not at all planned and actually really exhausting at times; we’d have to get up at 4am and drive for 6 hours some days. But it was extremely worth it.

Also, just want to say I managed to fit a whole week into a backpack. SO. Proud.

Landed in San Jose at 10am, got our rental car and made our way to San Francisco. Cue ‘Full House’ theme song. We stopped in Half Moon Bay for lunch, which was this cute little town with delicious food and continued on our journey to the city.

We decided we’d see the ‘Full House’ house because why wouldn’t we? Our whole childhood was that home. It is indeed an actual house, smudged in between the rest of the painted lady houses. You can’t go inside of it and all there really is to it is the infamous red door and the face of the home but it’s still pretty cool to see.

Then we made our way over to the Golden Gate Bridge, where there is no gates and nothing is gold. That big ole red bridge was just awesome to finally see in person. You always see it in photos or on shows and movies, but it was cool to be there and see the surroundings of it. We got the photo through going to Fort Point.

We also went to Lombard Street which was pretty groovy and a Giants game. During our uber ride to the game, we spoke to our driver and another passenger and they talked us into going to L.A. Originally we weren’t going to, but they convinced us. So we caught an airbnb and decided we’d leave for Yosemite National Park early in the morning the next day so we could head down to L.A. when we were done.

I can’t even describe the atmosphere of this place. It is humble and magical and exquisite and quiet. Mountains are where I find myself most at peace and I loved every second of this place. Heads up if you ever go, there’s no service once you get in and you have to use an actual map so make sure you know where you’re going and what you want to do.

We got done pretty early here because we saw every part that we wanted to see and decided to leave for L.A. then and there. It’s about a 6 hour drive so we would end up getting to an airbnb late but we were beat from hiking and being up so early that we didn’t mind at all.

Btw, this is the first day I had In-N-Out Burger and let me tell ya, I haven’t had a burger in two years and I LOVED it. I probably will never eat another unless it’s from In-N-Out.

Woke up and drove an hour for breakfast to The Griddle on Sunset Blvd. The traffic in L.A. is horrendous but the drive was SO worth it. If you are ever in L.A., go to The Griddle. I ended up getting what I refer to as apple pie pancakes, which were bigger than my head and came in a trio. Mhmm, so good.

Santa Monica Pier was callin’ our name so my brother and I headed over there to see what all the rage was about. It was pretty cool. All I could think about was the fact that the Hannah Montana movie was shot where I was standing.

Then Kevin decided that since it was such a beautiful day out, we were going to walk to Venice Beach. It was about a 30-40 minute walk. Not too bad but when your feet have blisters from the hike from the day before, it isn’t exactly good either.

Nevertheless, we made it there with little to none tears and lots of ‘ooh’s’ and ‘ah’s’. Venice Beach is a whole ‘nother world, I tell ya. The people there are unapologetically themselves. What I mean by this is, this man was walking and belched as loud as he could, ‘caught’ his burp in his hand, and threw it in people’s faces behind him, followed by lots of barking at others.

Even though this is the place for all homeless people to find a home in, it still has a vibrant energy that cannot be matched by anywhere else. Such characters Venice Beach holds.

We knew for a fact that we weren’t leaving the city of angels until we saw the Hollywood sign. So that’s exactly what we did. Woke up, ate at a gas station, watched a YouTube video of the best way to view the Hollywood sign, and finally started on our trek. Because if you Google Maps the Hollywood sign, it will take you to Griffith Observatory. Which is an amazing view, don’t get me wrong, just not the best.

There’s a park called Lake Hollywood Park. Park your car and walk towards all the signs that say ‘No Trespassing’. Literally. I guess most residents living by the sign have put up ‘fake’ signs that steer you away from hiking up to see it. That’s what the video and the locals who hiked up with us said anyways. Tricky tricky.

The view was amazing and so worth it. It was a long, miserable hike though. Very steep hills and many signs about watching for rattlesnakes which didn’t necessarily help with mine and Kev’s anxiety, ha!

After we made our way back down, we headed to the Hollywood Walk of Fame. So overhyped. Honestly just a bunch of stars with names on the ground and a place for people to pass out their mixtapes.. but seriously. But Kev did see Jodi Sweetin (Stephanie from ‘Full House’) which was pretty exciting!

We still had so much daylight left so we made our way over to LACMA, which is the Los Angeles Contemporary Museum of Art. We didn’t go inside but still made sure to capture the infamous lights photo!

Then made our way to In-N-Out… again. No shame.

Also went to The Grove, which is like a regular mall on steroids, tbh. Soooooooo nice. I wish I would’ve had the money to buy something in every store but admiring from afar was what was best for me at the time.

Monterey. We made our way to the Monterey Bay Aquarium, which is supposed to be really extravagant and cool. It was, don’t get me wrong, but I had high standards that weren’t met. Still so cool though.

We also walked to the Fisherman’s Wharf while we were there and got some fried shrimp, which was deee-licious! All the fishermen boats were pretty sick as well.

I will say, Monterey was the cutest little town. Everything was pretty much walking distance within where we wanted to go. The food was good, the people were friendly, and the view was spectacular.

A sweet ending to our California adventure.

I loved every second of this trip. We decided where were going the night before and it was thrilling and stressful but always worked out in the end. I don’t even know if I could choose a favorite part or city because they’re all so different and unique in their own way. I loved Yosemite and L.A. though, for sure. There’s just something about the environment that makes me feel inspired.

“California is always a good idea.”

in love with words & this life of mine. View more posts